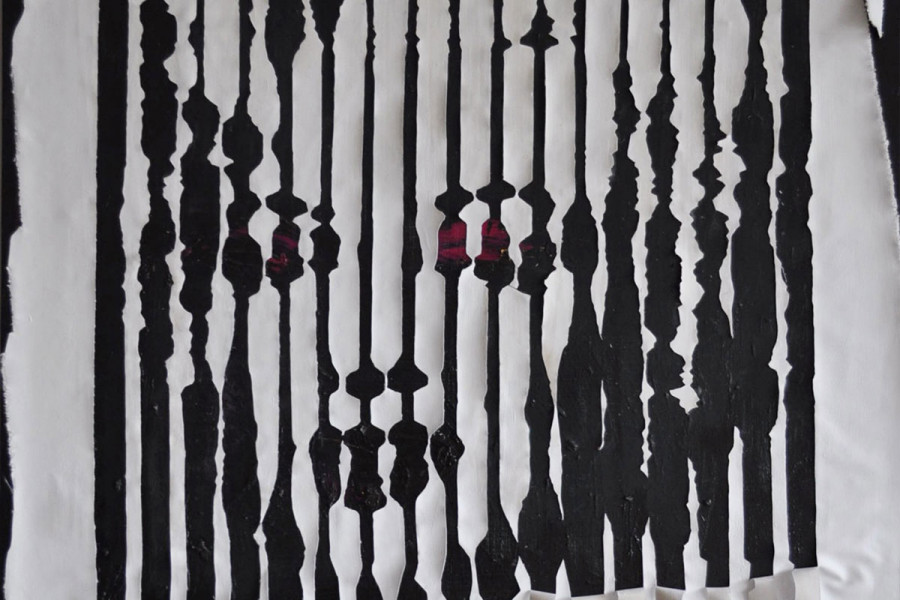 By Helena Sánchez
A lovely house in Santa Eulalia with spectacular sea views is the home of Jesús Albarrán, an artist who has lived on the island since 2002. The aim of his work is to surprise his viewers, and he certainly manages to do that as it is hard to remain indifferent about his paintings – nor to easily forget them. At first they look like strips, creases or paint drips until… when observed from a different angle… faces appear (maybe of famous people) as if they were photographs that gradually progress from an abstraction to a recognizable image. Jesús was born in Toledo in 1945, and from early childhood he was interested in art and liked to draw. However, Spain was very poor in those days, so his father encouraged him to study things that would open up options for his future. Painting was secondary because according to his father: “artists go hungry”. He finished high school and went on to university, but had to drop out as his family’s financial needs required him to start working. He was able to get a job as an illustrator at an advertising agency in Madrid when he was 18 years old. He was good at his work, and it provided money for his family, so he abandoned the idea of going back to university and dedicated himself fully to his creative activities.

He continued developing his career as a designer and later as the creative director in various companies. In 1973 he started his own advertising agency, and some very popular pharmaceutical campaigns helped him to have success. At the same time, he continued to nourish his artistic talent. Over the years it evolved mostly in a self-taught way, but he was also receiving training at prestigious academies such as the Peña Art School in the centre of Madrid. In the late 80s destiny led Jesús to Ibiza. He bought a terraced house without knowing anything about the island nor ever visiting it. “There were few good roads and you found country folk who did not even speak Spanish”, he remembers. He frequently came to this Mediterranean paradise for his holidays, and in 2000 he took early retirement, sold his company and set up an art gallery in Santa Eulalia called Soma. He sustained it for four years, but eventually it proved to be unprofitable.

Nonetheless, from the year 2000 onwards Jesús has been fully involved with his artistic activity and has participated in countless exhibitions – some of which have been remarkably successful, such as a series of paintings dedicated to the world of bullfighting. During this time he has gradually developed the technique which is now his trademark. He realized that people today do not understand abstract work because it has lost its raison d’être. He says that “In the 20th century there has been such an explosion of information, that viewers have become disoriented”, and this led him towards his figurative techniques. He has made the most of his advertising experience by using computer programmes to create a series of phases that lead to the image he intends to obtain. In a recent exhibition he placed marks on the floor that indicated where the spectators should stand to get the correct view. At the moment he is experimenting with a concept of art that comes out from the painting, and he has in mind more ambitious projects. These involve new challenges that always have the aim of innovating – like manipulating materials such as cutting aluminium with a laser. Jesús belongs to a number of artist associations and he has seen that it is very difficult for artists to live from their work. He laments that there are very good artists with internationally-known names who cannot survive solely with their artwork. We hope that this tendency will change, but in the meantime, we will let ourselves be surprised by the innovations of Jesús Albarrán. •