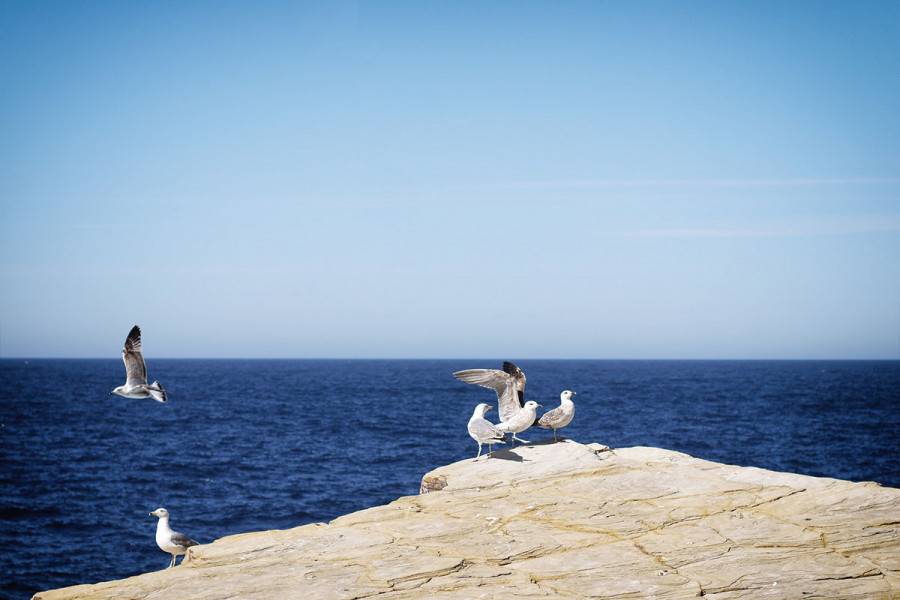 By Gato Suárez
Punta Galera bay in Ibiza is famous for its jagged and criss-crossed stone terraces. It’s great for diving from the cliffs or sunbathing over the rocks like lizards – even on a warm day in March, which it was when I did a photo-shoot there with my friend Helene. Just as we were finishing up an interesting looking man approached us – goatee beard, heavy tan, red tank top and shorts, carrying a large plastic bag full of supplies and an eight litre container of fresh drinking water. The first thing he said was, “welcome to my herb garden”, as he had seen me picking and eating one of my favourite wild plants – the sea fennel that only grows near the shore amongst the rocks.

The man goes by the name of Alex, and is originally from Czechoslovakia. He invited us to have a cup of coffee and we were happy to oblige, but asked where exactly were we to have this coffee? The answer was at his home a mere 2 minute walk away, which is one of the caves in Punta Galera. Yes, Alex is indeed a 21st century caveman who is living a private and primitive life that is rare in this day and age. We got a tour of his 2.0 by 1.5 meter cave, which is basically just a bedroom with a boom-box, an altar with several deities, flowers, candles, incense and a bookshelf with about seven books. Outside the cave, on the terrace, there is a lounge, outdoor kitchen and his boutique – yes the man is running a shop where he sells seasoned salts for cooking which he creates from natural ingredients. One of his mixes is named, “Salvation”, and another is called “Punta Galera”. He has been a cave resident going on 2 years now, and before him a Peruvian shaman lived in the same cave for many years. That man passed away not too long ago, and there is a photo of him on the altar outside the cave.

Helene was invited to enter the cave and listen to some Santoor music from India on his headphones. Alex is a spiritual man on a mission of self-discovery and awareness. He’s currently reading an eclectic list of books that includes the Bible, Paulo Coehlo and Osho. He revels in the relaxing and liberating feeling of being secluded in nature – a feeling that most people never get to enjoy due to the hustle and bustle of modern society. He has left all of that behind. Before becoming a cave man he gave up his house, his car and even destroyed his laptop by cracking it over his knees. We settled down and Alex made a fire on his stove with a few small branches. He boiled the water, collected the local herbs and prepared three cups of coffee – one with chilli flavour, and the other two infused with fresh Ibiza herbs picked from the mountain. We got to talking, and Alex expressed his constant worries about what our destructive civilization is doing to mother earth. He practices what he preaches as a model cave dweller who can be seen cleaning the beach and forest around him every chance he gets.

We had been there for almost two hours, drinking coffee, chatting, enjoying the view; and as we began to show signs that we were leaving he very discretely opened two treasure chests. This is where he keeps little baggies with his mixed salt rubs for grilling, making broth or seasoning anything you could possibly imagine. ‘Sal de Cucó’ is the name of his brand of cooking salts. You wouldn’t think that a cave man could be so organized with packaging, branding, etc., or have the social skills of a salesman... but he does. I left there having purchased two baggies of salts and Helene took three. How lucky we are to live on this marvellous island. Only in Ibiza can one afford to take such a fascinating two hour detour while in the middle of doing one’s work. It’s a very special way to meet people and get to know interesting things about the island... and all it takes is saying ‘Yes’ a bit more often. •