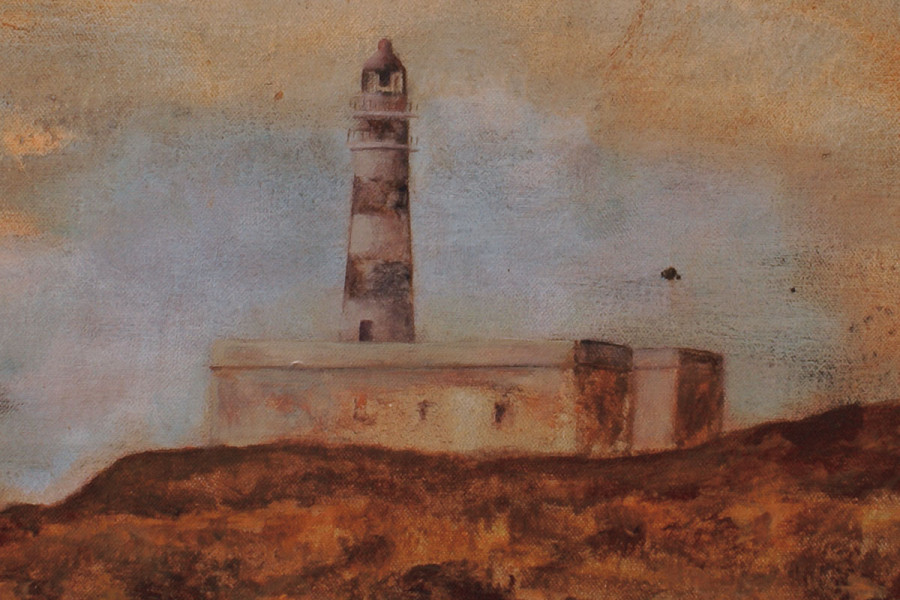 You cannot paint without love

By Helena Sánchez
Miguel Ángel García was not born on Ibiza but instead on Mallorca... but then as a baby he was brought over to the White Island and now feels as Ibicenco as can be. As a child, he liked collecting coins and stamps, but what he enjoyed the most was to use his mother’s lipstick and eyeliner to draw with, or her button collection (she was a dressmaker) to make his first collages with.

Part of a family of artist cousins and uncles, he was always drawing and painting. They all admitted he was good at it, that he had talent, but that’s as far as it would go, until Miguel Angel was 23 and he met his love, his angel, his muse: Josefina. She encouraged him to dive into painting and to give lessons. Since then he has been teaching at municipal workshops, with great success, the techniques of figurative painting to adults of all ages. He has also been ceaselessly showcasing his work: Ibiza, Mallorca, Ciudad Real, Barcelona, Madrid, Shanghai... taking part in many collective exhibitions there as well as individual ones. He has recently been a finalist in painting at the prestigious Florence Shanghai Prize. When asked why he did not study Fine Arts, for example, Miguel Angel answered by telling the following story: “Once upon a time, there was a man who worked fixing doors, handles and other things in a brothel. Time went by and his bosses told him that one of his duties would now include controlling the names of the people who came into the brothel. He said he could not do so as he could not read. For this reason they fired him and the poor man, in order to earn a living, started fixing doors and other utensils, and lending out his tools, to the village neighbours. Little by little and through his commitment and know-how he started earning everyone’s trust, so that eventually his small business became an empire, receiving the praise of the mayor and all of his neighbours, who felt proud of him.” Although the story has little to do with our man, his is the story of a self-taught painter who, like the man who fixed doors, is on the way to receiving recognition for his work, commitment and know-how. Every day, Miguel Angel wakes up early, has a hearty breakfast and gets to work. While he mixes on his palette the colours from which he obtains a wide range of shades and as he adds layers of oils onto the canvas, another half-finished painting will be drying off so that it may be continued, always from the inside outwards, as painters like Caravaggio used to do in the old days. Suddenly, his morning is over. “I would need to have a few lifetimes in order to have enough time to create everything that is in my mind,” he says. He doesn’t even need to travel for inspiration, he goes out on his bicycle and captures an instant, a little corner of Ibiza that is lit in a special way, that he then takes into his pieces. Calm landscapes, timeless architecture, etc. This permanence in time is what drives him to use oil-based paints instead of water-based ones, although the latter is a technique he loves. “Here there is an amazing light to paint to but the climate is just no good for the conservation of paper,” he explains. He rarely moves away from the figurative style and he prefers to leave aside contemporary styles. When he does incorporate new elements he prefers to keep the reasons to himself, as something personal he prefers not to talk about, which fits with his shy and reserved character. However, his works have something undescribable within them – they seem to contain that special sensitivity that he was born with and that shines through them as you observe them. Those interested in his works can contact him, visit his workshop, buy his artwork and even order their own pieces. •