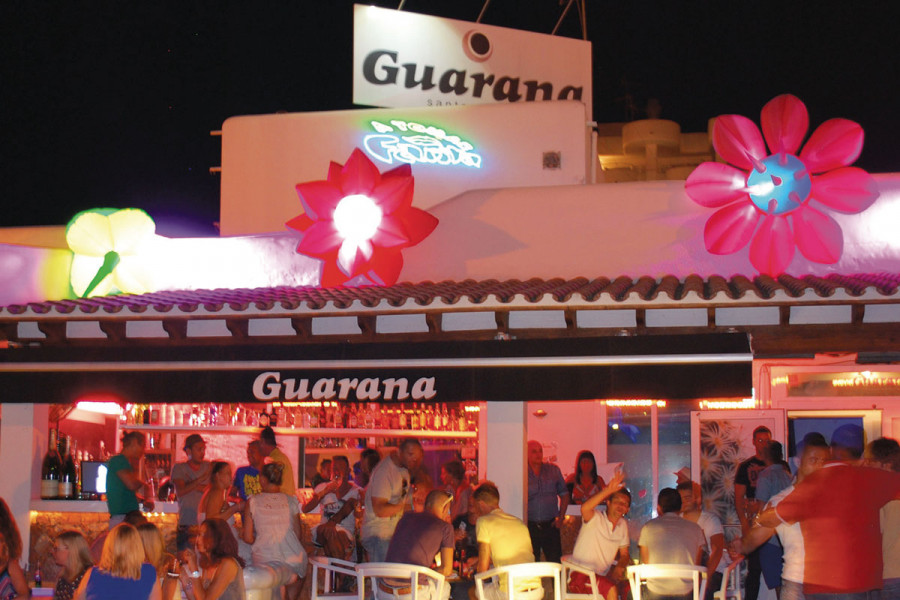 Text: Cat Weisweiller
Guarana is a fully licensed bar/club that has stood firm in Santa Eulalia for nearly two decades. We decided to hook up with its owner across all those years, Alex Picazo-Arias, to learn a little about its history and plans for the future.

Alex was born in Valencia in 1976. Two years later, his parents decided to lay down roots in Ibiza, with him and his two older brothers in tow. Alex has fond memories of schooling in the mountains of San Antonio surrounded by pine trees. From here his creative juices could flow unabated – later, at secondary school, seeing him produce prizewinning paintings, excelling in chess championships, and loving music with a passion. Inspired by the progressive and psychedelic music of the likes of Pink Floyd, Alex took up guitar from an early age, and later gigged across the island in many a band.

His first summer season out of school, Alex shunned further education in favour of immersing himself in restaurant management. Soon after, his combined appetite for business, hospitality and music, was irreversibly sated by an empty shell that stood in the harbour of Santa Eulalia. The empty shell in question had been gifted to his father in 1996, in exchange for his contribution to leading a large part of the construction of the harbour.

The family got to renovating the building with a view to opening the first, and still only, dedicated live music venue in the town of Santa Eularia: Guarana. However the council, sensitive to the risks of compromising a family residential area, were slow in producing a live music licence. Undeterred, Guarana opened later the same year, with the then resident DJ, Matt Caseli, creating an underground vibe – playing predominantly electro and garage. Not surprisingly, the youth of the region eagerly welcomed a conveniently placed venue to party in to the early hours of the morning.

By 2000, Guarana had proven its worth, and was duly awarded a live music licence. This inspired a refurb to clean and brighten it up – catapulting it from underground, to very much under the social spotlight. It reopened with live music on Sundays: “In those days, nothing ever happened on Sunday afternoons/evenings. All the local restaurants were busy at midday, so it made sense for us to fill a gap by offering after lunch music sessions, and an opportunity for people to get their fix of partying, but still get to bed early enough for work on Monday morning!”  For this, Alex tirelessly sourced leading bands from Europe to perform; including top Algerian artist from Paris, Amar Sundy, and very famous Spanish blues band, Los Reyes del K.O.

This initial long-awaited injection of live music soon morphed into incorporating live music on week days too, and even live instrumentals to accompany the DJ sets; often, and to this day, seeing multi-tasker Alex providing guitar. Alex admits he’s a bit of a stickler for hard work, “I like to do everything I do to the max.” True to form, in 2009, he bought the restaurant next door, renovated it, and opened it as el café. He ran it for 2 years, “Until I found out the hard way, that running a restaurant and a club was just too much like hard work!” Alex rented the restaurant out, and, a year later, realised that he needed a break from the hospitality industry altogether: “After 15 years of going full throttle, I was at risk of burning out and wanted to spend some quality time with my daughters.”

With both el café and Guarana rented out, a year spent with his daughters (Mareike, 15, and Mia, 5) was just what Alex needed to refuel his entrepreneurial zest and bring him back to the helm of his ventures with added momentum: “I had the time of my life hanging out with my girls, and wouldn’t have changed it for the world. But having run Guarana for 17 years, I was ready to get back to business.” This summer, Alex stepped back into the frame, with a firm commitment to bringing even more live music to the region. He also emerged with a renewed recognition that good business practice is about moving with the times: “Ibiza is changing. It’s cleaning up its act. It’s our job to adjust around these changes, and cater for an ever more sophisticated market. Survival in business is all about striving to upgrade, compete, and improve.”

In a cathartic final concession to live music, Alex has now converted the DJ booth into an upgraded stage for bands. Throughout summer, Guarana opened its doors 7 nights a week, 8pm – 6am, with live music Thursday through Sunday – topped and tailed with sets by his resident DJ Tom (aka Mr Squid). A far cry from its underground days, the electronic music has matured along with Alex and his diehard regulars: “We’re now all about an eclectic mix of surf and retro funk to vocal, Latin and jazz house.”

In winter, Guarana joins the very few fully licensed all-night live music and dance venues on the island. Duly honouring its ongoing commitment to the island locals and residents over the winter months, it offers a comfortable clubbing environment and showcases the best of the island’s musical talents, whatever their nationality; including award-winning home-grown sweethearts: La Mala Hierba. Not to mention giving the island residents a coveted opportunity to dance to the wee hours, all year round. As for Alex, it’s clear he’s here to stay, “In two years, I will have spent half my life running Guarana,” he muses as our interview draws to a close. “Ibiza has an incredible way of renewing itself, like the phoenix.” I raise a quizzical eyebrow, he explains: “In Greek mythology, a phoenix is a long-lived bird that is cyclically regenerated or reborn. Associated with the sun, a phoenix gets new life by rising from the ashes of its predecessor. I feel like this is the best way to describe how Ibiza is evolving from a hardcore clubbing island to something more all-embracing.” It looks like Guarana and its owner are evolving in the same way; going from strength to strength as both a live music venue and much appreciated all-night hang out. •