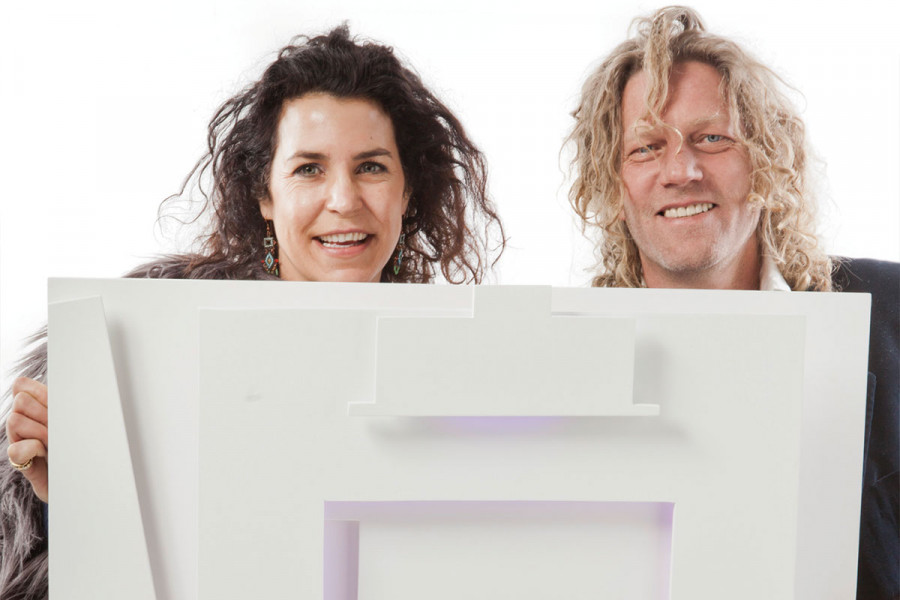 By Cat Weisweiller
Artists, Patrice Aaftink & Jean Marc des Bouvrie, share three key common loves: their romantic love for each other, their burgeoning love for Ibiza, and their unbridled love for experimentation through art. Take this impassioned list and package it in a collaborative working partnership, and you have yourself a creative foothold bursting with combined talent; as our visit to their studio and gallery space Art & Design Ibiza near Plan Be (Novum and El Pato as was) revealed.

3D art installations and illuminations don the walls. Whilst state-of-the-art furnishings punctuate the floor space; inviting visitors to happily recline on luxury pods complete with partial soundproofing and built-in sound systems. All these varied signature creations come courtesy of Patrice and Jean Marc. A chat with the creative duo conjures up a fun loving and warm-hearted exchange, coupled with a clear impression of their mutual respect for one another and heartfelt passion for all that they do. I would even wager that for what Patrice offers in her measured philosophical / observational approach with particular interest in drawing off the environment, Jean Marc offers in his hands-on, gung-ho, irrepressible passion for freestyle design – a perfect combination most would say.

Jean Marc and Patrice, originally from Holland, met almost two years ago in Amsterdam, fell head over heels in love, joined forces creatively, and earlier this year settled in Ibiza. With them they bring a varied and innovative portfolio, reflecting their collective years of past artistic endeavours elsewhere. Jean Marc comes from years of architectural and interior design, following in the footsteps of his father: world renowned furniture and interior designer, Jan des Bouvrie. His early love of building dirt bikes, customising Harleys, restoring boats, and general creative wizardry continued to quietly bubble under his steadfast mainstream career as international architect and interior designer for many a high-end private residence, five star hotel, historical landmark and ultramodern industrial space. After 25 years of this, Jean Marc has returned to form, unshackling himself from – albeit an overwhelmingly successful – a somewhat restrictive career and reverting to his great passion: freestyle design, in all its many forms, predominantly including workable art, and trendsetting furnishings, signage and illuminations.

Patrice, on the other hand, qualified in Fine Art, later to emerge as a visual artist; having bravely shunned a very promising and secure legal career. Her creative background echoes of witty and astute visual observations on life and the environment around us. Her generosity of spirit and caring manner has also taken her overseas to assist with creative charity training programmes. Her equal regard for the environment has had her collaborating on an eco-friendly, entirely off-the-grid construction and social project called: The Earthship, which has left her eager to pursue more of the same in Ibiza. By her own admission, it is Jean Marc that inspired her to propel her visual statements into 3D. For instance, for her latest exhibition ‘Old Masters Now’ Patrice created abstract 3D art with wood & LED light, inspired by the work of old masters like Da Vinci, Rembrandt and Rodin.

Together, Jean Marc and Patrice have since collaborated on many a joint project, not least working up an LED-illuminated dress for local designer, Natalie Groeneveld’s, fashion show at Atzaró this summer. Perhaps their most notable combo project to date, however, is an installation called Queen Beatrix in the Spotlight – a minimalist take on Andy Warhol’s: The Queen. Their version, which was one of 65 works chosen out of 2000 entered to celebrate Queen Beatrix’s 75th anniversary – earned itself a mention for “most innovative work” and was placed on exhibit at the Royal Palace Het Loo & Royal Palace Soestdijk in Holland accordingly.

Their wholeheartedly collaborative process certainly seems to be working for them, and, as such, they are keen to extend the same cooperative culture into their studio space by inviting others to collaborate in projects: “We are all about the supportive spirit of ‘collaborate, don’t compete’.” •