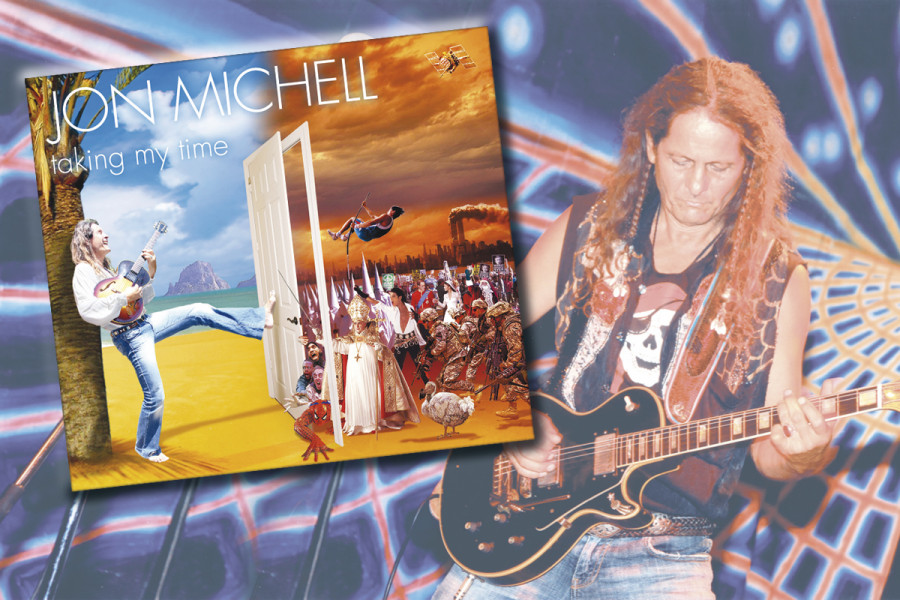 By Cat Weisweiller
Long-term Ibiza resident, Jean-Michel Fueter (aka Jon Michell), has recently released his eagerly awaited album: Taking my time. IbiCASA met up with him to get an insight into the man behind the album, and how it came to be.

Jon Michell was born in Tanzania to Swiss parents who were missionaries. As such, much of his youth was spent moving around Africa until his family returned to settle permanently in Switzerland when he was 14. Around that time he received his first acoustic guitar. His love of acoustic guitar soon morphed into one of the electric guitar – an affinity with which earned him a spot on the first album of major Swiss heavy metal band: Krokus.

In 1987, aged 37, he moved permanently to Ibiza – having first experienced the island in 1971. By his own admission, his antics in the early years here were the produce of “a complicated soul with a troubled past”. So much so in fact, that it inspired a Diario journalist to pen his biography Trip; later published in 2005. The clue is in the title. Jon Michell is in no doubt that music was a vital catalyst in turning his focuses to a purer and happier existence. He went on to spend the 90s gigging with his highly reputed local blues/rock band, Los Malos. They hit the headlines regularly – not only for their musical prowess but for their avid campaigning to defend live music and musicians’ rights; things unceremoniously sidelined by the sudden explosion of clubs and electronic music onto the island.

After time, Jon Michell – realising that he needed to “tone down” his act to make his music more accessible – turned his musical attention to blues and country rock. And so the Jon Michell band was born. At the same time, he could also be found performing alongside Blues Dave and Chris Lee in a blues trio called Tres Hombres Tres Guitarras. Not to mention joining many visiting big names on stage including: Eric Burdon (Lead singer on world renowned songs: [Oh lord please] Don’t let me be misunderstood and House of the Rising Sun); Mick Jagger´s brother Chris; and German punk superstar, Nina Hagen. At the end of the 90s, Jon Michell joined forces with friends Alok, Merel and Belinda to create Namaste; the much heralded weekly Wednesday revelries at Las Dalias. Here, his time was – and still is – divided between selecting and coordinating all its live music output, occasionally taking to the stage himself, and adding ethnic instruments to his performance repertoire. All this now interspersed with acting as celebrant to numerous spiritual weddings on Ibiza.

In 2012, aged 60, Jon Michell felt that it was high time to consolidate his long held love of music: “I realised that time was pushing on. And despite having written songs all my life, and gigged at least once a week since I could remember, I had nothing to show for it, and nothing to give audiences requesting CDs.” By spring 2012, his weekly recording sessions with Bernie Weimer at Ibiza-based ThirdEarStudios had begun in earnest. His 14 track album, released in September this year, is the produce of much time, consideration and creative spirit and reflects his ongoing commitment to nurturing live music: “I was determined to record all instruments live, without relying on any electronics, and not to favour any one element over another. For instance, with my instrumental contribution – all guitars – I felt no need to build in superfluous show-off solos. I felt it important to instead remove all ego and give each song the space for its individual elements to breathe.”

The result is a heartfelt and insightfully autobiographical selection of songs – offering everything from country influenced rock, to swing, boogie, and even calypso – with vocals and all guitars performed by Jon Michell, and keyboards, bass, drums and backing vocals added by skilled local guest musicians. The album cover – in itself a work of artistic genius and somehow reminiscent of the bygone days of vinyl’s collectable artwork – illustrates the thought provoking reasoning behind the album title: “In modern society, everything craves our attention. It’s easy to get sucked in via the internet, press, mobile phones, social networking, advertising, etc. The title ‘taking my time’ reflects my realisation that it’s important to sometimes shut out all the many distractions… instead of letting life simply pass us by.”

For latest info on where to purchase a copy of “taking my time” please visit www.thirdearmusic.de or email [email protected]