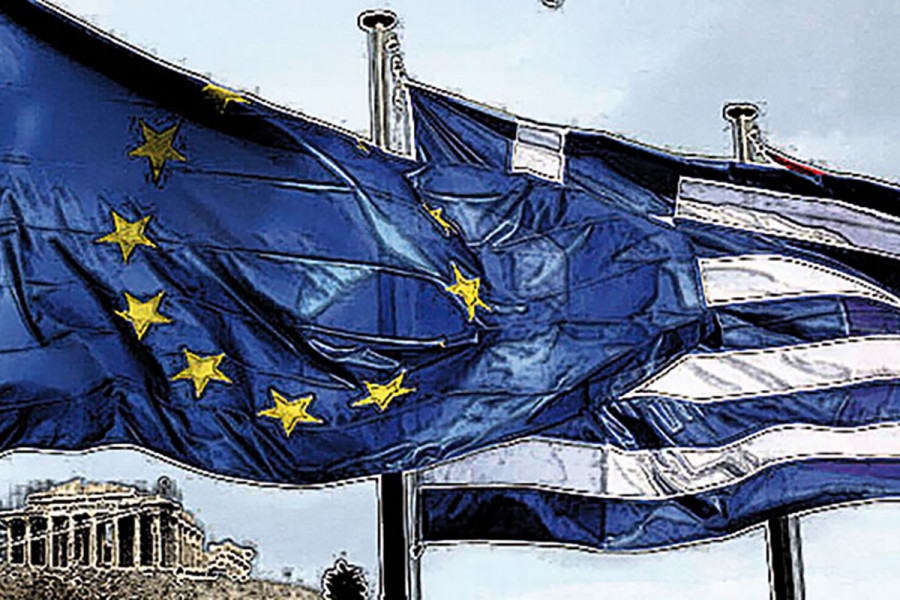 What will happen with Greece?

By Jerry Brownstein
In January of this year there were great expectations throughout Greece that the newly elected government of Alexis Tsipras and his Syriza party would put an end to years of suffering. The Greek voters had swung to supporting this left-wing party after five years of punishing austerity measures which were imposed by the terms of their ‘bailout’ deal with the EU. Thousands of joyous supporters flocked to central Athens to cheer Tsipras as he accepted the victory with these words: “The Greek people have written history. We are leaving behind catastrophic austerity, fear and autocratic government.” Hope was in the air, but six months later those hopes were dashed on the rocks of reality. Greece is still faced with crushing cutbacks that will further depress its ailing economy and lessen any chance of repaying its debt. Let’s look at how Greece got into this mess, where they stand now, and what the future may hold.

There are two sides to this story. The predominant narrative in the mainstream media goes something like this: Greece borrowed way too much money and spent most of it on exorbitant benefits for its citizens and the enrichment of corrupt government officials. They had to keep borrowing more and more to service these debts, but when the economic crash came in 2009 they could no longer borrow and faced default. To avoid bankruptcy they appealed to their sister states in the EU – the so-called ‘troika’ of the European Central Bank, the European Commission, and the I.M.F. (International Monetary Fund). They were given loans of about 240 billion euros to pay off most of their old debts. In return they agreed to a very strict regime of fiscal austerity combined with government reforms. This is what you hear on the news, and much of it is true. Greece certainly did borrow, spend and waste billions of euros in the years from 2001 to 2009… but there is more to the story. Why is it that international banks and investors were so eager to lend money to little Greece? Before 2001 Greece was considered a risky investment, but that all changed when they became part of the Eurozone. Investors no longer saw Greece as a credit risk because they assumed that the stronger Eurozone members like Germany would bail Greece out if there were any problems. As a result, investors and banks started investing heavily in Greek bonds. The former Greek government was suddenly able to borrow all that it wanted at very reasonable rates, so they gorged themselves on this cheap money. When the crash came in 2009, the banks stopped lending to Greece, and this made it impossible for them to pay their bloated debts.

The financial markets (banks) had leant heavily to Greece on the theory that the stronger Eurozone countries would back up their debts… but it turned out that they were wrong. Germany and other Eurozone nations were not willing to simply bail Greece out. However they could not just walk away because if Greece defaulted then the big banks in Germany and France would lose billions and be in danger of failing themselves. So a ‘bailout’ was devised that was not really a bailout. The money was not ‘given’ to Greece – they merely received a new loan to replace the old loans. In the words of Nobel Prize winning economist Joseph Stiglitz: “We should be clear: almost none of the huge amount of money loaned to Greece has actually gone there. It has gone to pay out private-sector creditors – including German and French banks. Greece has gotten only a pittance, but it has paid a high price to preserve these countries’ banking systems.” So instead of owing money to their bondholders, Greece now owes even more to the ‘Troika’. On top of that they were forced to accept very harsh spending cuts that were aimed almost exclusively at the working class and the poor. The wealthy Greeks (oligarchs) and the rich corporations were hardly touched at all. This policy has been a disaster. According to another Nobel Prize winning economist Paul Krugman, “Greece has experienced a full-fledged depression. The economy has contracted by 25%, unemployment has risen to 28% and youth unemployment exceeds 60%.”

After five years of suffering under this crushing ‘austerity’, the Greek people were finally fed up and elected Syriza to end their misery. This new government spent its first six months negotiating with the Troika to end the humiliation of enforced austerity. Yanis Varoufakis, their flamboyant finance minister, argued that the only way to spur the Greek economy was to reduce the loans and interest payments. But Germany and most of the Eurozone countries turned a deaf ear to these entreaties. They continued to insist that the crushing austerity remain in place and that the debts be paid in full. The Greeks were told that if they did not agree to these terms their country would be bankrupt. As the clock ticked down on the final day of negotiations Tsipras decided on a desperate move. He would put the issue to a democratic test by asking the Greek people for a Yes or No vote on the Troika’s proposal. His hope was that if the vote was No it would sway the Germans and others to respect the democratic process and have empathy for the people of Greece.

One week later the Greek people spoke with a resounding vote of ‘No’ – a clear message that they no longer would tolerate being repressed. This sparked a new wave of hope throughout Greece, but it was short-lived. The Germans and other EU nations were unmoved by the opinion of the Greek people, and insisted on keeping the austerity measures in place as a condition of extending the loans. In fact, their new terms were even more harsh than the ones that had been rejected. The Greeks had no recourse but to retreat in shame and accept the deal rather than face financial panic.

This is where it stands today. Greece is faced with a crushing debt that it cannot possibly repay because the enforced policy of ‘austerity’ destroys the Greek economy. Its government has been humiliated, and in the words of Tsipras, “must implement an agreement that I do not believe in”. They are told by their Troika masters that they must sell valuable government properties to private corporations… and the proceeds of those sales will not go to the Greek people… they will go to the Troika to pay off ever more loans. How long can the Greek people be made to suffer? Where will they turn for relief?

Answers to those questions may be coming soon. Greece has recently had another election in which Tsipras and Syriza have retained power despite the humiliation of the new ‘bailout’. Can they steer Greece to a brighter future? Will the Greek people continue to support them if things do not improve quickly? Or will they turn to the hard-right fascist parties that have been gaining strength? The last chapters of this Greek Tragedy have yet to be written… and the world watches. •