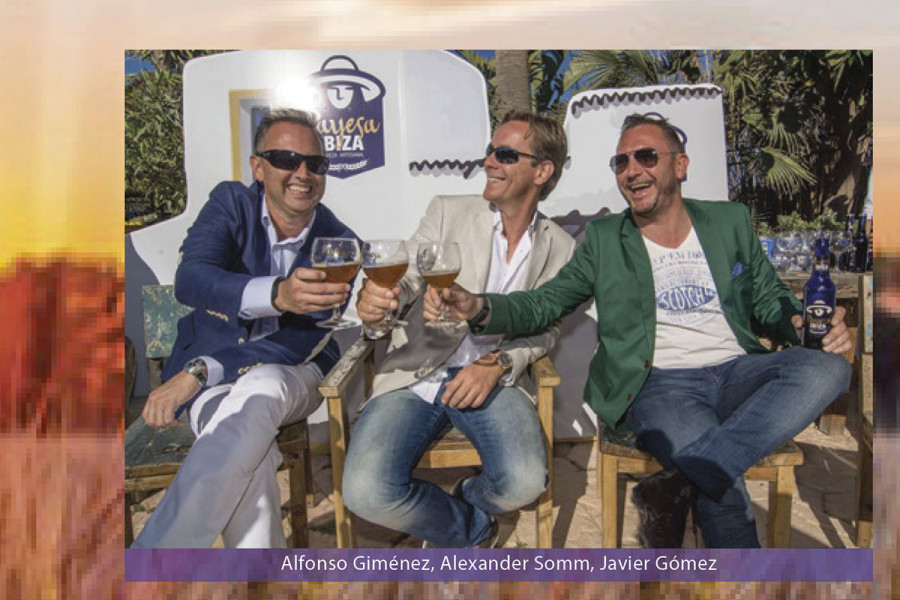 Ibiza in a bottle

By Cat Weisweiller - Photos: Jordi Cervera
Here at ibiCASA we have always maintained that a business driven from the heart, and with a due measure of regard for the island, is a sure recipe for success. Add a touch of esteemed business acumen, steep it in passion and camaraderie, and you have yourselves Ibiza’s newest export: Payesa beer. It would be remiss of us to feature this handcrafted beer, devoid of chemicals and additives, without an introduction to the people behind the brand: Alfonso Giménez, Javier Gómez, and Alexander Somm.

Payesa, previously known under the Ibicencan name of “Pagesa”, was dreamed up by Javier. Born and bred on the island, and with a background in hospitality, Javier fused his passion for beer, love of the island, and delight in customer satisfaction into developing a non-industrial beer geared toward the discerning beer connoisseurs amongst us. He approached an award-winning brewmaster on the mainland, and soon had a prototype in his hand that expertly fulfilled his every vision of the artisan brew he so longed to offer the island.

From conception in the winter of 2012, came his first batch in 2013; with around 6000 bottles personally distributed thereafter. Although his fervour for the brand eclipsed the all-consuming one-man operation at hand, no one was more pleased than Javier when his dear friend from Switzerland, Alexander, finally fulfilled his promise to move to Ibiza full-time. The pair had met during Javier’s 10 year sojourn in Zurich, and were bound by a pledge that they would one day work together. That day had come. Alexander, an architect by trade, didn’t need to be asked twice for this temporary career diversion. He immediately saw the potential in the product and jumped on board; with his only stipulation being that they enlisted his newly acquainted friend, Alfonso, as their marketing director.

Alfonso, originally from Seville, is not just any marketing director. Fresh off a four-year stint as marketing director for the mighty Palladium Hotel Group here, and erstwhile the global marketing director for Cadbury Schweppes, there is no doubt that they had hit gold. As luck would have it, Alfonso had long yearned for an opportunity to work for himself, away from the strains of corporate life, and within the nurturing confines of a more intimate, collaborative working environment. “I saw the potential in both the brand and the other two partners straightaway, and happily joined the force. I love the product, and knew it was something I could really put my heart and soul into. I relish the idea of putting my marketing expertise to work on a brand that helps project the true essence of Ibiza to the rest of the world.”

Together, this efficacious threesome took Javier’s modest operation of 2013, and catapulted it into full production this year, launching in April – retaining the same guarded original recipe and non-industrial brewery on the mainland. What is perhaps most compelling about Payesa, quite apart from its smooth, full-bodied, natural taste “with notes of cereal, some herbs and dry fruit, and highlights of caramel flavours”, is the ethos behind the brand. 100% of the water used in their beer comes from a subterranean spring here in San Rafael. The water goes through a natural and chemical-free filtration process, under the watchful eye of the same family-run water company who own and tend to the land under which the spring flows, with their age-old, ancestral traditions.

Considering around 90% of any given beer comprises of water, Payesa is already nearly there in offering 100% of Ibiza in their bottles. However, they’re not stopping there: when we went to print they were in the process of making their next batch with as much local barley as they could get their hands on. Moreover, they are working in collaboration with the Cooperativa Agrícola Santa Eulalia to seek out and grow the best barley crop for Ibiza into the future: “One type is already being grown here in moderation, but our goal is to integrate another variety best suited to Ibiza, and at the same time eradicate monoculture – which leads to a wider spread of pests and diseases.” Looking to the longer term, all three partners share the same unbridled enthusiasm for setting up the first micro-brewery on the island, not to mention launching a fully organic range as a sideline to their existing production.

Quite apart from honouring the produce of the land, they seek to honour its people and traditions in equal measure. Their launch and live events being cases in point, with their promotional package enlisting and supporting the finest in Ibicencan décor, art, costume and music. “Payesa stands as a celebration of all that is Ibiza. As a brand, we’re all about retaining the essence and traditions of Ibiza, enhanced with a tasteful modern-day twist.” They take an all-inclusive approach to their marketing too, with their logo generated by a local artist’s winning entry, and their customers invited – as part of their ‘Made of Ibiza’ campaign – to tweet images of Payesa (or a cardboard cut-out of the same) set against an Ibizencan backdrop, in exchange for a prize for the best entry chosen monthly.

The brand also believes in putting its money where its mouth is: “We live here because we love the island, so it’s up to us to protect the very things we value now, into the future.” True to their word, they have so far been raising funds for the Association of Organic Producers of Ibiza and Formentera (APAEEF) via the sale of local graffiti artist, Jerom’s impression of the contemporary Payesa, and offering free legal aid to Alianza Mar Blava, who are heroically fending the Balearics from the oil giants. Intention, Innovation and Integrity – the three I’s of Ibiza business – all happily present and correct… •