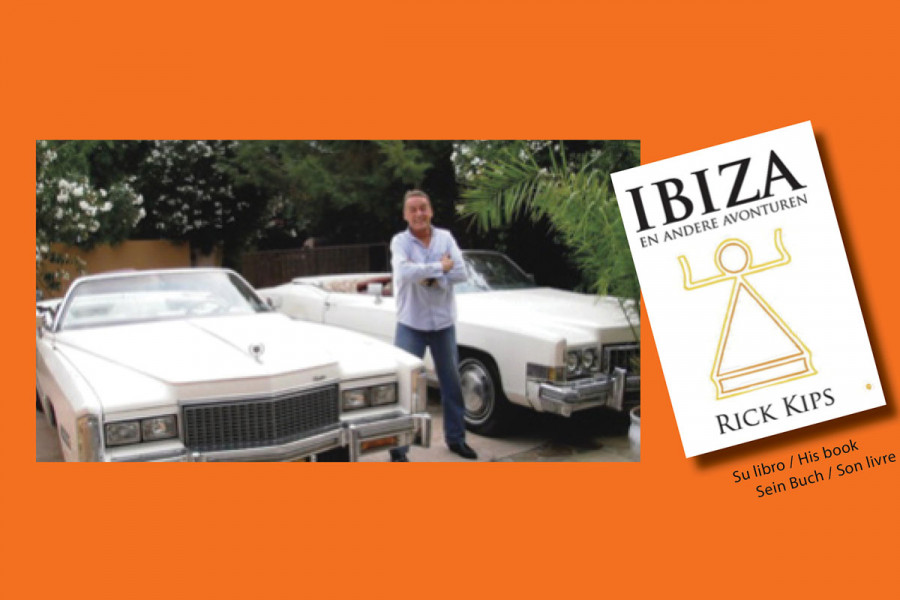 IBIZA and other adventures

By Cat Weisweiller
This article tells the story of a true island legend: Rick Kips. Upon meeting him, the extent of his storytelling charm quickly becomes evident. In fact, it is no surprise that his published autobiography, IBIZA en andere avonturen (IBIZA and other adventures), has become a bestseller. As the book is presently only available in Dutch, we felt compelled to share just a little of Rick’s extraordinary life with you here.

Rick comes from a major Dutch meat packaging company: Kips. The story of his arrival on the island in 1957, aged six, paints a vivid picture of Ibicencan life in the fifties. At the time he, his parents, and older brother, had ventured off on holiday to Majorca. Having successfully made it to Palma, they were promptly informed that their travel agency had gone bust, leaving them no prospect of returning home any time soon. As such, the offer of carriage on a WW2 Bristol Blenheim Bomber to the next island, Ibiza, was somehow one that they couldn’t resist.

The family landed on a tiny airstrip in the sand. It is hard to imagine that this unassuming patch of land was later to become the island’s main airport, frequented by over four million people a year. As main roads were also not yet in existence, their onward journey to Ibiza town took a gruelling three hours. Rick recalls pitching up at the sandy Vara de Rey, where donkeys used for transporting ice were lined up outside a hotel. He remembers contemplating how on earth, in the heat of the summer, any ice ever arrived intact? The hotel in question was the Montesol which, at the time, was focused less on hospitality, and more on its role as the sole ice maker on the island. A midnight embargo on the use of electricity meant that oil lamps and candles were the strict order of the night. After a short while, Rick’s “well to do” father could not abide by it any longer, and ventured out to find more comfortable accommodation for himself and his family.

Very soon, he set his eyes and heart on a yacht moored in the port. Regrettably, the impressive vessel was already taken, and by none other than Errol Flynn; who later became a close family friend. Sitting on the steps of a building, looking despondent and desperate, the Kips family later caught the attention of a passer-by, Dr Alfredo Roig. Having no grasp of Spanish, they somehow managed to gesticulate their plight. Alfredo, who was the only medical doctor on Ibiza, and thus of huge political and social importance, took this as his cue to introduce them to the most influential people on the island. Not least, Juan Bermejo, the commander of the navy who, in Franco times, held the highest political rank on the island. It would probably be fair to say that this chance meeting set the tone of the rest of Rick’s life here.

A large estate in Cala Carbó, built on land purchased by his father, became Rick’s base here for many years. For a long time, a director of the CIA was his neighbour, creating all manner of intrigue for Rick as he grew up. Aged 18, whilst studying dentistry in Malibu, he tragically lost his father to cancer. A family friend, Dr. Robert van Riet, stepped in as his guardian. Robert was one of the first plastic surgeons in California and, as such, extremely well-connected; intensifying Rick’s exposure to the celebrity world no end. The most notable association of which was probably with his neighbours in Palm Springs: Frank Sinatra and Barbara Marx. Rick remembers the fateful day when he and his brother ruefully turned up too late for a private flight to Pasadena with Sinatra’s mother, Dolly. They were to later learn that the Learjet had crashed, killing all inside. Needless to say, they are eternally grateful for this very lucky escape.

Rick’s other celebrity friends are too numerous to mention here, but suffice to say the Pope, Liza Minnelli and Bob Hope, amongst so many others, featured heavily in his life. Outside of America, Rick has lived in countless European capitals over the years. Argentina also featured strongly in his life as the place where he reared polo horses, and set up the biggest winery in the world with his business partner of many years: Lord Alain Levenfiche.

And so back to Rick’s life here in Ibiza. Despite being surrounded by highest society and all its trappings, Rick has kept his feet firmly on the ground. His notable humility probably being attributed to his keen interest in the world around him, as this next story illustrates: “When we first arrived on the island, I remember being upset by the fact that my lack of Spanish meant I couldn’t communicate with a blind man that always stood in the town centre raising money for the blind association, ONCE. As a boy, I so wanted to lift up his sunglasses and see what was behind them. Later on, when my level of Spanish was good enough, I approached him and struck up a conversation. After time, he could recognise my approaching footsteps, always saying ‘Hello again my Dutch friend.’”

It turns out that Rick’s curiosity unearthed quite a story: the chap hadn’t always been blind, nor on the street. He had in fact held a prestigious desk job at the main branch of Banca March. One day he was found slumped at his desk, and later pronounced dead by Alfredo. In the absence of refrigerated morgues at the time, the dead were sprinkled with quicklime; their coffins then paraded around the town centre so that the locals could pay their last respects. “Imagine everyone’s shock and horror, when the coffin suddenly flew open and poor Jesus [yes, that truly was his name] emerged clearly not dead, but blinded by the quicklime that had been thrown in his eyes.”

It is hard to say whether, in Ibiza alone, Rick is best known as a bar/restaurant/real estate expert, past manager of Pikes and the Hippodrome, owner of a Oilily fashion boutique, or simply as a very proficient entrepreneur. Nowadays, he is probably best described as an author, inventor, and think-tank consultant; executives understandably keen to draw on his years of unique personal and professional experience to enhance their brands. However, anyone around in the early 80s would probably agree that his greatest personal gift to the island was his beloved telecommunication’s business.

In the early 80s the club boom was well and truly underway, but access to the outside world was still desperately lacking. Mobile phones did not yet exist, and landlines (then metered and hugely expensive) were few and far between. Rick quickly realised that with the sudden influx of housebuyers, holidaymakers, and party-goers to the island, the demand for modern communication was far outreaching the supply. “I set myself up in the former practice of our friend Alfredo on the Vara de Rey, offering telex and telephone services. Fax machines and money transfer facilities followed later. It was the first venture of its kind on the island.” So immersed was he in all his other projects around the island, that he failed to notice the lack of visitors to his ‘Oficina de Servicios’ in the first couple of weeks. “It was only when a mother came in clutching a grimacing child and gesturing for the toilet, that I realised that ‘Office Services’ didn’t translate so well into Spanish; ‘servicios’ being the word for toilet!”

Despite this initial blip, word soon got round, and Rick’s business took off monumentally. For 10 years, all manner of nationalities and characters piled in. Open 8am to 8pm, 6 days a week, the office became a veritable hub of frenzied activity; a social club many would say. Anybody who was anybody would secure their life’s projects at Rick’s door; including Nina Hagen and Ursula Andress. Relied upon for his warm hospitality and multilingual advice, he became the gatekeeper of many a major project or celebrity crisis. He recalls one time when his overseeing eye came in particularly handy: around the time of Freddie Mercury’s famous rendition of ‘Barcelona’ at the KU club with Montserrat Caballé, Freddie was honoured by Barcelona with the key to the city. Along with this great honour, came the offer to fund his 41st birthday celebrations at Pikes hotel. The party itself became the stuff of Ibiza legend. But, what few know is the carefully guarded secret of the Barcelona’s planned birthday cake for Freddie.

There Rick was, now in his mid 30s, sat in his office receiving all the correspondence for Freddie Mercury’s much-anticipated party. “It was the do of the decade. Everyone was invited… Everyone except me that is… As I had a whole load of RSVPs at my office, I cunningly offered to deliver them in person to Pikes – with the sole purpose of securing myself (and the 11 other people I’d promised them to) an invite to the party.” What he ended up with was far more than he had bargained for. Impressed by his enthusiasm, the then manager of Pikes asked him to travel to Barcelona and arrange the transport of Freddie’s cake. An easy task, surely? Not when you consider that according to Rick, “The cake had taken local villagers two years to lovingly etch into the shape of Barcelona’s Gaudi cathedral; had a base that measured 50 metres at its widest point; and rose to the height of a person.” The first job of transporting the cake, by cargo plane from Barcelona to Ibiza, went entirely to plan. As did getting it to Pikes. The problem only came when someone decided that the cake would be better placed slightly across from where it now lay. “I was at the front directing the manoeuvre. Behind me were a hundred locals painstakingly shifting the cake base. Everything was fine until someone tripped, followed by the rest of the bearers… all falling like dominoes. The entire cake toppled to the ground and, just like that, it was no more... ”

Ever the quick thinker, and under the watchful eye of his dear friend to this day, Tony Pike, Rick initiated an urgent operation to gather every cake on the island. These were then layered together, covered with cream whipped up in a paint mixer, and etched with the message “Happy Birthday Freddie!” in icing on the top. This leads up to the part of the story that is known: blissfully unaware of the Gaudi cake disaster that had gone before, Freddie saw the cake and was reduced to tears; acknowledging that never before had he been presented with such an authentic and touching gesture. With this inspiring local tale of “all’s well, that ends well”, so ends our précis of the life of a remarkable island resident: Rick Kips. •