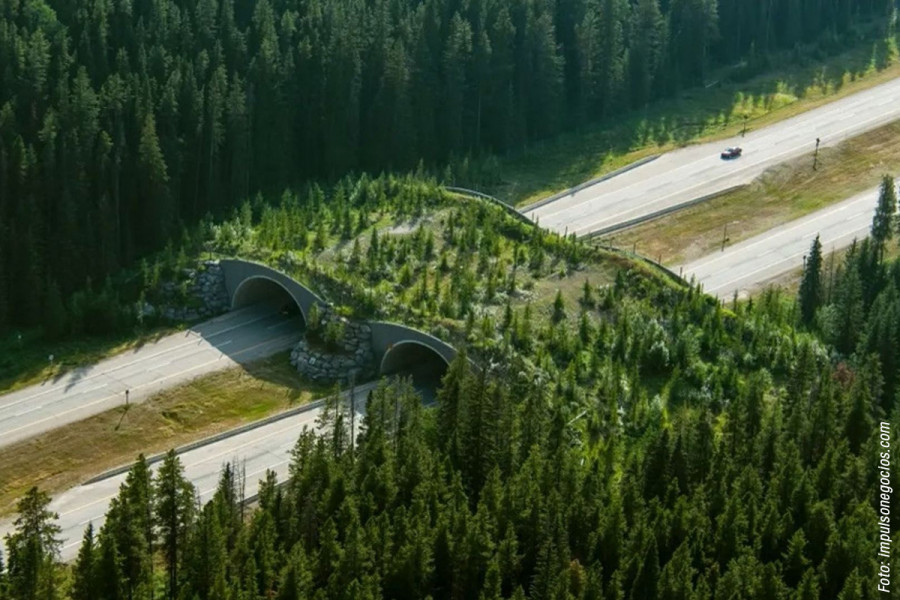 Sweden will build a series of new animal bridges as part of the global efforts to help wildlife navigate busy roads. Every April Sweden’s main highway comes to a standstill as hundreds of reindeer cross the asphalt on their annual journey to the mountains. Swedish authorities announced they would build up to a dozen “renoducts” (reindeer viaducts) to aid the crossings, which will also help moose and lynx to move around the landscape. These renoducts are part of a growing number of wildlife bridges and underpasses around the world that aim to connect fractured habitats.

On the Yucatán peninsula in Mexico, underpasses have been used to shield jaguars from traffic. Natural canopy bridges in the Peruvian Amazon have helped porcupines, monkeys and other animals pass over natural gas pipelines. In Los Angeles (US) the largest wild life bridge in the world will be built to help save the mountain lion population from local extinction. Canada’s Banff National Park has overseen one of the most successful uses of wildlife bridges by installing seven overpasses and 41 underpasses on the section of the park that is bisected by the Trans-Canada Highway. In his latest show of support for improved gender equality, Pope Francis has appointed two women to Vatican posts that had previously only been held by men. These appointments at the beginning of 2021 were his boldest moves yet in giving women more empowerment in the male-dominated Holy See. Nathalie Becquart was named as co-undersecretary of the Synod of Bishops, with the right to vote in the assemblies of bishops. Francis Summaria became the first woman Promoter of Justice in the Vatican’s Court of Appeals.
Pope Francis has made gradual progress in his efforts to have women and lay people play a greater role in the church. In 2020 he appointed six women to senior roles on the council that oversees Vatican finances. He has also named women to the posts of deputy foreign minister, director of the Vatican Museums and deputy head of the Vatican Press Office. Cardinal Mario Grech, the secretary general of the synod, said: “The Pope has signalled his desire for a greater participation of women in the process of discernment and decision-making. A door has been opened and we will see what other steps can be taken.” Drivers may no longer have to take risks when passing large vehicles thanks to smart technology that projects images of the oncoming traffic onto the back of trucks. Pioneered by Samsung, the system uses a wireless camera that attaches to the front of the truck and films the oncoming traffic. It sends these images to a video wall located on the back of the truck. Thus, drivers behind the truck can see the road in front of it. The camera has night vision capability to allow the system to be fully functional after sunset.
This is potentially a game-changer for motor safety with the power to prevent countless accidents. The technology was first tested in Argentina which has one of the world’s highest rates of road fatalities at a shocking annual toll of 12.4 deaths per 100,000 inhabitants. Many of these are caused by blind overtaking, but there were zero accidents in the numerous trials of the safety truck. Samsung hopes to eventually introduce this new technology to the entire motoring industry. Finland’s prime minister Sanna Marin is the youngest female head of government in the West, and she has spearheaded an acceleration of her country’s progressive policies. Ms Marin leads a coalition government in which all five parties are led by women, and they are aiming to set Finland on a course that uses innovative ideas to improve people’s lives. One of those ideas is a four day work week with six hour working days. Marin said, “I believe people deserve to spend more time with their families, loved ones, hobbies and other aspects of life. This could be the next step for us in working life.”
Another positive program that is championed by Finland is their “Housing First” concept. Like most countries they had struggled with the problem of taking care of the homeless. The government had built many short term shelters, but this did not solve the problem because it did not create a way for people to escape the trap of homelessness. They couldn’t get jobs without a housing address, and without a job they couldn’t get a flat. It was a vicious circle. In 2008 Finland started ‘Housing First’ with the goal that every citizen should have a residence. Under this program all homeless people are eligible to receive a small apartment and free counselling without any preconditions. It has been a great success as the number of homeless people is declining toward zero.

Finland has also been a leader in exploring the use of Universal Basic Income as the best way to reduce income inequality and provide for those who are in need. In this system every citizen has the right to start getting a monthly payment the day they turn 21, and they will continue receiving it for the rest of their lives. The amount of monthly payment needs to be just enough to live a simple life, because if it is more than that too many people may decide not to work. Finland has already experimented with this idea and they are looking into being the first country to implement it. The Ibiza Preservation Fund (IPF) recently announced a significant victory in the long-running campaign to stop oil and gas exploration in the seas near Ibiza. In early March of this year the Mar Blava Alliance, which IPF created in 2013, succeeded in winning support in the Spanish Parliament for a bill that will ban prospecting and exploration throughout Spanish Mediterranean waters. This new law should go into effect by early 2022, and it is the culmination of many years’ work.
In 2013 several different groups were against the presence of oil prospecting near Ibiza, but their efforts were not coordinated. IPF took a leading role in creating Mar Blava as an umbrella organization that all of the protestors could rally around. The resistance became more focused, and as a result that prospecting was cancelled. But like a bad horror film – where the monster whom you thought was dead rises up – the spectre of new oil prospecting near Ibiza arose once again. With this new law that danger to our seas will finally have ended... and the dolphins will dance with joy! The Spanish pharmaceutical company PharmaMar is testing a powerful antiviral called plitidepsin that could be a major tool in combating the symptoms of Covid-19. This chemical compound has been extracted from a sea squirt (marine invertebrate) called Aplidium albicans that comes from the seas near Ibiza – particularly in the waters of es Vedrà and Tagomago. By lowering the viral load it greatly reduces the symptoms of Covid-19, thus making recovery faster and easier. Researchers from the University of California (US) found that plitidepsin is 30 times more potent than remdesivir - the most commonly used antiviral drug. It is also proving to be effective against variants of the virus that have arisen. The success of plitidepsin against Covid-19 would not mean that the Aplidium sea squirts would be massively harvested from our waters. Pharmamar has isolated the key molecule, and is able to manufacture it synthetically... so our heroic sea squirts will not be molested. More and more doctors are prescribing nature experiences for the health benefits that come from reduced stress. The power of this ‘nature pill’ is well proven, and it can be a low-cost, low-risk way to curb the negative health effects of urbanisation and indoor lifestyles. New research is revealing just how much time we actually need to spend in nature to get the benefits. Researchers from the University of Michigan (US) wanted to identify the most effective dose of nature that was practical within the context of normal daily life. They gave people who lived in busy cities nature experiences ranging from ten to thirty minutes three times per week. The levels of the stress hormone cortisol were measured before and after the participants took a “nature pill”.
The data showed that a 20 minute nature experience was enough to significantly reduce cortisol levels. The effect was even greater between 20 to 30 minutes, after which benefits continued to accrue but at a slower rate. That fits with the findings of another recent study which found that spending at least 20 minutes in an urban park makes people feel significantly happier. So the next time you are feeling stressed... take the nature pill. The Step By Step language school in Ibiza has an interesting project that teaches their students how to use English creatively. It’s called ‘Good News from 2020”, and each student will write a summary of a positive news story from the very strange year that has just passed. According to Chus Zafra, the owner and director of the school: “The aim of the project is to be aware of the many good things that took place during this very difficult year; to look on the bright side of life with the positive philosophy of carpe diem.” Of course this is perfectly in synch with Ibiza Optimista, which has been finding and spreading good news from around the world since 2011. Louis Mapp is in his 80’s and a great-grandfather, but he still volunteers in the Neonatal Intensive Care Unit (NICU) of a hospital in Alabama (US). Once a week he drives to the hospital to hold, rock, feed and burp newborn babies whose families are unable to be there 24/7. His attention and love provides them with the vital human touch that newborns need. In addition to donating his time, Louis and his wife Melinda have donated one million dollars to the NICU. The Mapps are a heart warming and inspirational example of how important it is to help others.